Projectors have now become an essential part of everyone’s life. From cinemas, offices, educational institutes to even malls, projectors can be found everywhere. The most basic purpose of using projectors was, to brighten up the presentation or show some explanatory slides for the working reports.

Even home theater projectors are so common these days to watch movies, TV shows as well as play video games. No doubt, the popularity of these appliances has been growing with each passing day as they ensure the clarity of the picture to the maximum.

However, to decide which projector you should get for yourself, the first thing you are going to need is knowledge about different types of projectors available in the market and the working mechanism for each projector.

In this article, we will explain what projectors are, and how does a projector work regarding each type of it.

A projector is an electro-optical device that displays images on an enlarged scale. Its operating system is based on a light projection that sends an image signal on a remote screen. Projectors are mostly used as an alternative to monitors or televisions for large gatherings.

A projector has the ability to display an image that is large enough to be easily viewed by the audience. The audience can be people sitting on the ground, students in a classroom, and staff inside the office.

They are small in size, compact in design, and light in weight but the functioning they perform is very efficient.

Basic Parts Of A Projector

A projector has several essential parts that are specified for a particular function. These parts vary according to the technology used in each projector.

The built-in speakers are present in modern projectors that support an excellent audio system. They are very easy to set up without requiring external speakers.

To clean dust it has removable dust filters that consist of a dustproof net.

The two-channel cooling system provides constant temperature to maintain the stability and durability of the projector.

The air duct has been designed in such a way that it absorbs and weakens the noise while reducing air noises by almost 20%.

While digital projectors include different parts such as:

Color wheels and color filters are used in digital projectors to add colors to the white beams of light.

DMD chips and LCD panels are the parts of DLP and LCD projectors. There are microscopic chips installed in them to reflect as well as deflect colored light for creating images. Projectors that include three chips or panels have great picture quality.

Dichroic mirrors to filter white light are included in digital projectors. They reflect lights such as blue, green, and red. These same mirrors can be inverted to recombine light beams.

Sources Of Light In Projectors

Projection technology is incomplete without light. Pictures and images can only be formed and projected using light. Each projector has a different source of light. The old models of projectors had lamp bulbs while the modern ones have long-lasting sources of light such as lasers, LEDs, or a combination of both.

The different sources of light for projection are mentioned below: 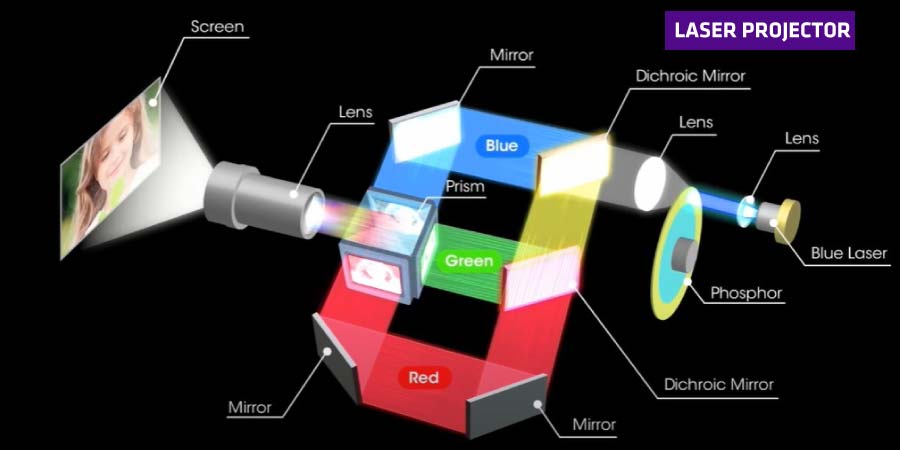 A strong beam of blue light is projected through lasers. The strength of it improves the quality of the picture as well as the contrast. Projectors using laser technology have the brightest images and sometimes their brightness reaches up to 30,000 lumens. It can also exceed this limit.

Though it is the brightest source of light, it is highly expensive. The quality of light never fades but these projectors often require little maintenance.

Chekout our guide about the best short throw projectors

These are glass bulbs that have mercury inside them. They have the ability to exhibit high output of light that helps in optimizing colors. These are less expensive as compared to other light sources and can also be replaced with ease.

They are losing their popularity these days due to shorter lamp life. The brightness of them also reduces fast with time.

Due to the continuous need for replacement and maintenance, they are not so cost-effective.

LEDs are a durable source of light with a lamp life of 20,000 hours or even more. There is color variation in different types of LEDs. It displays different colors without needing the white light split.

LEDs are not brighter than laser lights, however, they are small, light, and very convenient for making portable projectors.

How Do Slide Projectors Work?

Slide projectors have a different mechanism of working that happens with the use of a transparent glass sheet with painted or printed images on it. When the strong source of light passes through the slide, a magnified image forms.

Different sets of lenses are present to control magnification and focus. The slide projectors can display black and white as well as colored images with the help of a rotary tray that stores slide and you will have to put them manually in and out of the projector.

This is one of the traditional types of projector that was used earlier in offices, exhibitions, classes, and laboratories for displaying slideshows and photographs.

Types Of Projectors With Their Working

There re mainly three types of projectors regarding their hardware and picture quality:

Let’s examine each in detail.

How Do DLP Projectors Work?

DLP which stands for digital light processing has relatively new technology. It uses a digital micromirror device that changes its position continuously towards and away from the direction of projection in order to create an image.

A flickering red, green, and blue beam of light forms, when a powerfully focused beam of light travels through a rotating color wheel. Then light hits the digital micromirror device that aligns its mirror instantly towards the direction of projection by the input from the DLP chip.

An image forms on the screen with the help of reflected rays.

Why Color Wheel Is Used In DLP Projectors

To produce colored images, DLP projectors use a color wheel that is divided into three segments of red, green, and blue colors. The fast movement of the wheel creates flickering light of three colors. Some projectors also use a fourth color such as white to enhance the brightness and contrast.

Colored images can be created by using a flicker fusion threshold as well as the persistence of vision. If you don’t know about persistence vision then, it is the image that persists for microseconds when we flash a light bulb for short period.

If you start turning on and off the light quickly, there will be a point when a continuous ray of light is visible to the eyes. This is the way a fluorescent bulb or tube light works.

Similar technology is used in DLP projectors for displaying images.

How Do LCD Projectors Work? 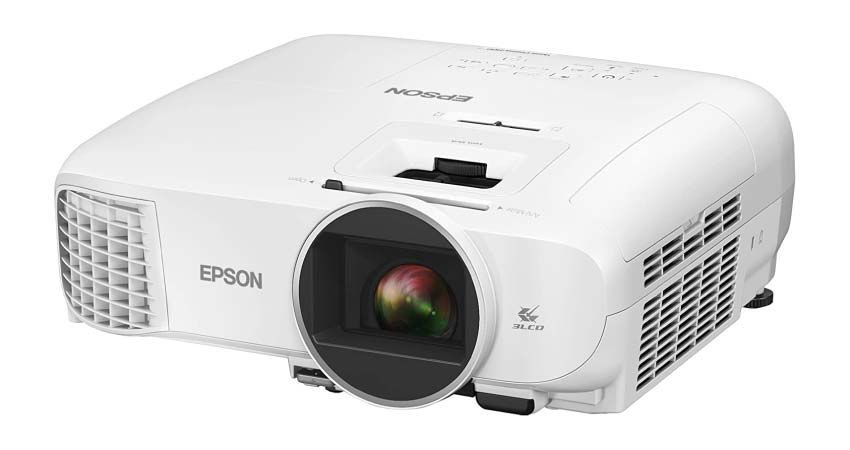 LCD projector works by shining bright light on the LCD panel. LCD projectors are the most demanding and popular device. They are very popular due to their liquid crystal matrix design. Another reason for their popularity is their price. They are inexpensive.

When a high-intensity focused beam of light shines through the LCD panel, it creates an image on the wall. The light provides correct focus and sharpness when it passes through different lenses and mirrors of the LCD panel. It also helps in controlling magnification and keystone correction.

A translucent screen that is able to create images by using thousands of pixels is known as an LCD panel. Each pixel is further divided into subpixels of colors red, blue and green. Liquid crystal helps to turn on and off the pixels to display an image.

The liquid crystal can easily be rotated or aligned with the help of electric charges for changing the polarity of the light. Then the light goes through the color filters to create a final image.

The LCDs do not emit light by themselves but need a backlight to create images.

Working Of  A 3LCD Projector

Most generic projectors use a single LCD for creating images while the high-end projectors use 3LCD panels. They work on the same basic principle but have some variation in the internal structure that is a bit more complex.

As the name shows, three LCD technology refers to the 3LCD projector that works by producing an image with the help of 3LCD panels. Each panel will display a separate color channel among red, green, and blue.

In the end, an image formed by the three LCDs will combine to make a single RGB image.

In this way, a beam of light separates into red, green, and blue rays that will be channeled towards their particular LCD panels with the help of mirrors. The process is the same as each panel of those 3LCD panels will display separate color channels among red, green, and blue. In the end, an image formed by the three LCDs will combine to make a single RGB image.

How Do LED Projectors Work? 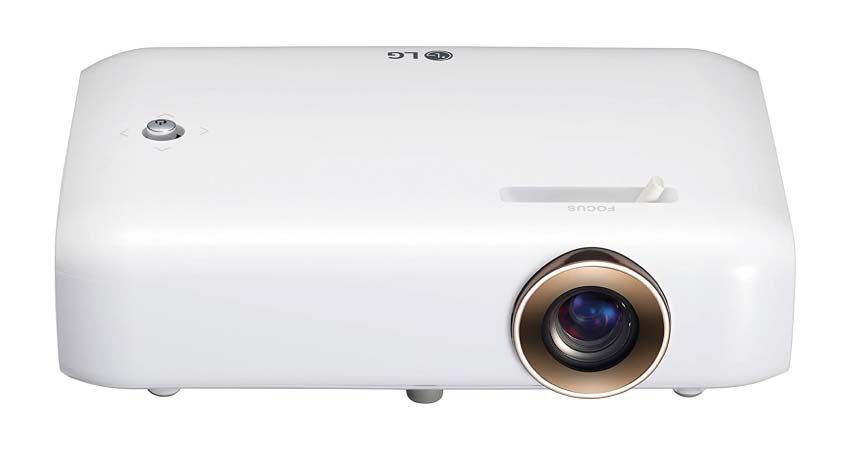 To get maximum image quality at low costs, LED projectors can be installed on many light sources. LED projectors are the most purchased projectors due to their massive popularity. This technology helps you to create portable projectors, that can be carried anywhere you want.

Such kinds of projectors are also being used in smartphones and even inside other smaller devices. Due to being a small-sized device, these projectors deliver good color, contrast, and excellent image quality. But they are not as bright as laser projectors are.

LED projectors are very durable and have a lamp life of 20,000 hours or sometimes even more. They are capable of displaying different colors without any need to split white light.

It works on the process of electroluminescence for the production of light. Electricity passes through a semiconductor material by which LEDs are made of and when electricity passes, it kicks off electrons that are bigger and can’t pass.

By shrinking, they give off protons constituting particles of light. In this way, less heat generates while extending the life of the lamp. Their working mechanism is quite similar to DLP and LCD projectors except they have lamps.

Laser projectors are very advantageous due to their energy efficiency and ability to create brighter images. No heating time is required for it as it gives the best performance by just hitting the turn-on button.

No doubt laser projectors are great for use but they are also very expensive and sometimes it becomes difficult to afford them. If there is some issue occurs, you may need to replace the projector as its fixed laser can’t be replaced.

Due to their cheap price, anyone can afford them. Also, they are very easy to replace due to malfunctioning.