Are you worried about the sudden fluctuation in the electricity bill? You might be considering that the abrupt increase in the bill is due to the extra power consumption by your projector.

However, it’s not true at all, your all electrical appliances are involved not the projector alone. The total power consumption can be estimated by the duration of usage and also by the type of device.

A huge variety of projectors is available on the market,  you just have to check out the wattages used by your projector per hour.

After testing a huge variety of projectors with different light sources like lamps, LEDs, and lasers we are going to clear your doubts about how many watts a projector uses? and how to calculate it?.

How Many Watts Does A Projector Use?

The consumption of wattages depends on the specified technology of the projector, such as a laser projector will consume different wattage from a DLP projector.

Some small-sized projectors with traditional technology use almost 100 watts per hour. At the same time, some may use nearly 900 watts per hour. This wattage does depend on the projector’s brightness, which usually comes with the type of bulb and lumens.

Similarly, the laser projectors use more watts as compared to the LED projectors. You can make changes in the power consumption by adjusting the brightness to a level that doesn’t take much power.

How to Calculate Projector Power Consumption?

Fortunately, calculating the power consumption of a projector isn’t difficult. You can simply do it by utilizing basic maths.

The following methods are useful if you do not know how to calculate the watts used by your projector:

Finding The Projector Wattage Per Hour:

To find the wattage consumed by your projector, you must check the label that displays the total number of watts.

You can also skim the specification section to get the exact wattage rating of your selected projector.

Usually, the wattage is calculated per hour, so if you find a label showing 500W, it means the power consumed by your projector is 500W per hour.

If you are using a projector regularly, you can calculate the number of watts used per day. The following formula can help in finding the wattage:

Let’s calculate it by an example: Your projector has a wattage of 150W that works for 2 hours a day.

This equation simply illustrates that the number of watts per day for your projector is 600W.

By Converting Watts into KiloWatts:

Companies charge in kilo watts, not in watts per hour. So, you need to convert the watts into kilowatts to get the precise wattage measurement.

Let’s take another example to explain it:

Suppose the numbers from the previous example:

After finding the power consumption per hour in kilo watts, you can estimate further.

To find the exact power consumed by a projector, you may also take help through the electricity bill where all the rates are already mentioned. You can calculate via company bill receipt or the monthly electricity bills.

You must estimate the power consumption rate to evaluate the exact kilowattage per hour, day, or month.

For example, the power used by a 300W projector running for four consecutive hours in kilowatts can be calculated as

To find out the monthly bill costs let’s suppose the electricity charge for 1 kWh is $1. This can be calculated by using the following formula:

For calculation of cost:

This means the total cost will be $36 if the rate is $1 per kilowatt-hour.

How Many Watts Is a Projector Bulb? 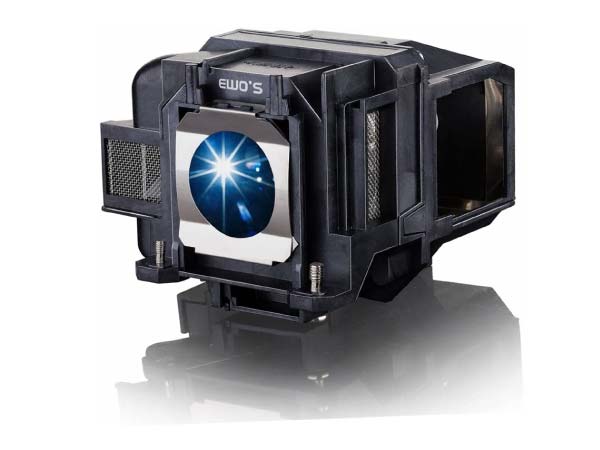 Usually, a projector uses 100 – 200 watts of power on average, but this can vary from model to model and also the type of bulb used in them. The laser projectors consume more energy than a LED projector and also have a quite longer lifespan (follow this guide to get an in-depth idea about projectors’ lamp life).

LED projectors are considered the most energy-efficient due to the lower wattage bulb and decent life span of 20,000 hours. Similarly, there are Halogen lights that are best known for the emission of bright white light. However, the lifespan of these lights is very short.

LCD projectors include other varieties of bulbs that are comparably expensive. If there are more pixels in an image it means the resolution will be higher and also the power. A 1080p or HD resolution display 2 million pixels while 720p has 1 million pixels. So, as the pixels are more the power consumption will also be higher.

How Many Watts Does A LED Projector Use?

Most LED projectors use 30 to 150 Watts, which can also vary depending on the specifications. Due to the LED as a light source, they are pretty efficient. Also LED projectors are affordable compared to the others.

How Many Watts Does A Laser Projector Use?

The average wattage consumption of a laser projector is between 150W to 800W per hour. The advanced technology of these projectors enables the conversion of lasers into light and then displays a bright image. though they are costly, still projector geeks like me always try to get a quality laser projector to enjoy real colors and brightness with a super long lamp life

How Much Power Does A Mini Projector Consume?

As per our tests, mini projectors consume less power compared to the others, which usually range between 150 to 800 watts. Also, the smallest units are available that use only 50 watts per hour.

How Many Watts Does A Battery-Powered Projector Use?

The projectors that are powered by batteries are newly introduced in the era and are also known as portable projectors. They use a Lithium-Ion battery similar to the one present in smartphones to provide power to the projector.

Usually, a battery-powered projector uses power from 10 to 90 Watt. Some projectors of this kind consume only 8W power per hour.

Though the battery-powered projectors are not that good in terms of picture quality, still the batteries take 2 hours for a complete charge and can enhance the camping experience drastically.

Wattage Consumed By A DLP Projector

Though DLP projectors are very popular due to their special feature like high brightness compared to others, still they consumed lots of energy. Even the average models use almost 170 to 350 Watts per hour.

In addition to that, the lifespan of DLP projectors is 2200 to 3500 hours which can hardly last for three or four hours if used consecutively. This makes them very costly.

Does a Projector Use More Electricity Than a TV?

The power consumption varies due to several available options. A projector use more power compared to television but depending on the quality and the situation can get inverse.

High-quality projectors are energy efficient in many ways as compared to televisions. They use less amount of energy than a similar-sized TV. The wattages consumed by the projector are not more than usual, even though the size of the screen is large.

By using an LED projector, the power consumption observed was comparably less than TV during tests.

Although projectors use enough power to raise the electricity bills, you can reduce the power used by them.

Some settings are installed in projectors that allow you to adjust the power usage.

You might have seen the “Eco Mode” in your projector that is specified for lowering the bulb’s brightness. In this mode, you can easily save 20% of your power.

If you are more concerned about power-saving projectors, purchase some good-quality LED projectors as they are highly efficient in saving power. In contrast, the LCD and DLP projectors are expensive and use lots of electricity.

It depends on your budget to decide how much you need to spend on buying a particular type of projector. After estimating the power consumption in watts per hour, you can then make an appropriate decision.

If you find it difficult to evaluate how much power does a projector use, you can seek help from customer support. You can also buy some gadgets such as Watt Meter to measure accurate numbers.

Projectors are highly energy efficient in providing a great viewing experience. They provide ease of usage and transfer to different places at home. You can watch premium quality content without spending many wattages compared to TVs.

Do Projectors Consume a Lot of Electricity?

It is true that a projector uses more electricity than a TV but not as much. It all depends on the quality and brightness of the picture. If the brightness is higher, the power consumption will be greater. Though the electricity bills get under the influence of power usage, the clarity and other cost-effective features will definitely make the projector more suitable for you.

What is the Average Lifetime power consumption of a projector?