What Is The Projector Contrast Ratio?

The ratio between the maximum bright white and maximum dark black on the screen is known as the projector contrast ratio.

For example: If you have a projector with a 2000:1 contrast ratio you will get 2000 times bright whites than dark black.

Our Recommended Projectors for Black Levels

What Are The Types Of Contrast Ratio And Their Measurements?

We are going to discuss the FOFO (Full-On and Full-Off) and ANSI contrast which is highly relevant to the projectors. While you are at it, learn about projector resolution as well.

What Is Full-On And Full-Off (FOFO):

It is the ratio between the brightness of the solid white image to the darkest solid black image of the projector.

i.e.: if a home theater unit has a 2000:1 FOFO contrast ratio your projector will produce 2000x brighter solid white images as compared to solid black images.

(An image to understand the measurements of FOFO Contrast ratio):

What Is ANSI Contrast:

(An image to understand the measurements of ANSI Contrast ratio):

Why Contrast Ratio Is Important For Projectors? 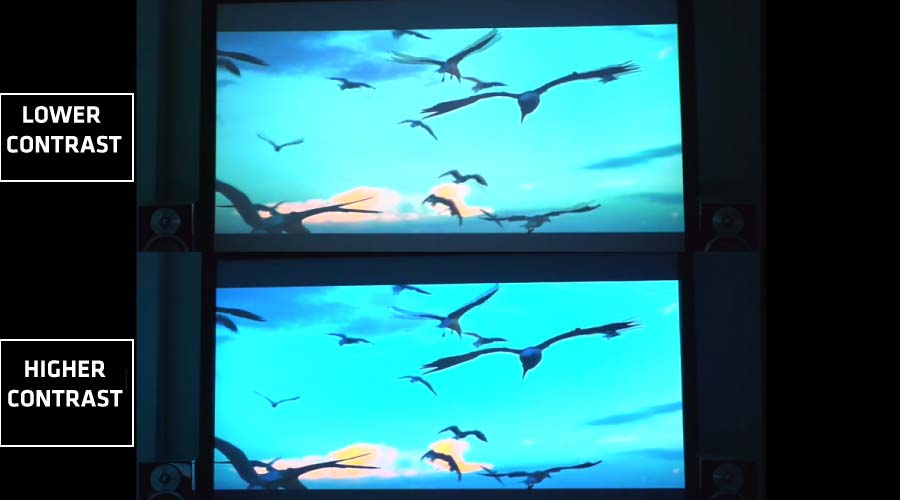 As the name clarifies itself that the contrast ratio is a ratio between white and dark or the shades of bright and dark. It plays a vital role to provide rich colors, clear shadows, and deeper blacks with negligible dullness or fadedness.

As per our data, without a decent contrast ratio, you will get muted colors and terrible blacks even if your projector has a mind-blowing color gamut and brightness.

The contrast ratio is powerful enough to provide you with nearly 3-dimensional pictures, popup the colors and black levels, provide sufficient clearness as well. Also, the contrast ratio is a key ingredient to develop the mood of users according to the scenes.

What Is A Good Contrast Ratio For A Projector?

Well, we can't provide you with a fixed contrast ratio for a projector because the selection of the contrast ratio solely depends on the environment.

NOTE: Contrast ratio is as important as lumens; if you have a projector with decent lumens and lower contrast you will get completely washed out images Learn the difference between lux and lumens while you are at it. So make sure to choose a projector that can perform well within your environment perfectly.

How To Improve The Contrast Ratio Of The Existing Projector?

How To Improve The Contrast Ratio In Modest Ambient

As ambient light is the enemy of projectors you can uplift the contrast ratio by darkening your room with some simple techniques.

Now you are wondering if it is best to keep my projector in a dark room, yes you are right. It will work like a charm for you. Otherwise, the only option is to get a newer unit with high contrast ratio.

Replacing an existing white screen with a dark screen is working very well for me, I have a projector with an average contrast ratio of 5000:1 which was working well in a dark cave but when I put it on a modest ambient room I feel the annoying gray fads.

After replacing the screen I feel significant improvements in the blacks. You can also check out our guide about black vs. white projector screens to explore the actual differences.

3: By Tweaking The Settings:

You can play with the following things in the setting of the projector to enrich the contrast ratio as well. 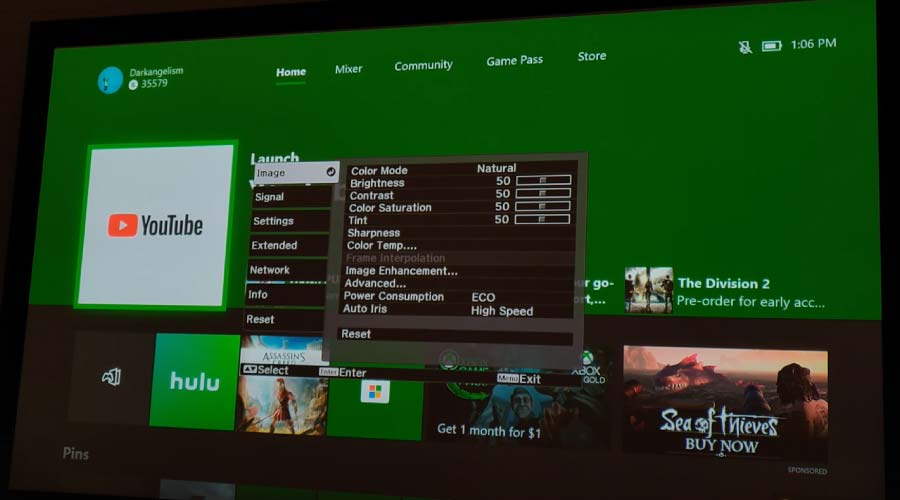 Also, some modern projectors have built-in modes to make adjustments within a click, as I have BenQ Ht3500i that has some preset modes like HDR10 and HLG, optimized movies, cinema master video+.

The major benefits of preset modes are, you don't need to do calibration; you will get the professional calibration right out of the box. On the other hand, if you are going to do calibration yourself you may not get satisfactory results until you are an expert, as calibration needs an experienced eye.

How To Improve The Contrast Ratio In Dark

1:  Make sure to block any source of ambient lights.  2:  Paint your room with a dark color, also ceiling should be dark as well to get a top-notch contrast within a decent dark environment.  3:  by tweaking the color setting as we have mentioned above, you have to play with brightness, color saturation, color temperature, contrast. Tint etc. to get your desired contrast and blacks.
NOTE: We recommend you to take help from an expert to calibrate your projector once.
4:  The final option is to replace a light screen with a dark screen.

How Does Brightness Affect The Contrast Ratio?

NOTE: Keep your brightness at the medium level if you want to use it in a dark cave, because high brightness may compromise the contrast and blacks in a dark environment.

The contrast ratio is the backbone of picture quality, if your projector doesn't have a sufficient contrast ratio you will get completely washed-out images without vibrant colors and deeper black levels.

Through dynamic contrast, ratios can be 1,000,000:1 but it is not native you have to change the backlight again and again according to the scene if your projector doesn't have dynamic Irish which is a kind of a frustrating process.

That's why we advised you to keep eye on the native contrast ratio rather than dynamic contrast.

Thanks For reading Out!

The bottom line is you have to spend a bit more to get a projector with decent contrast.

Q: Is A Higher Contrast Ratio Better For Projectors?

Yes, higher contrast means you will get more rich colors, blacks, and clearness.

Yes, high contrast ratio is way better than a lower contrast ratio for your eyes, as our eyes like more soft and cold colors rather than warm colors. You can check out the wikiHow guide as well.

Q: What is the contrast ratio for an outdoor projector?

Not at all, the dynamic contrast ratio is nothing but a marketing term, the manufacturer is listing million to one or infinity to one contrast ratio which is practically not possible.

Q: Should you use a contrast enhancer?

If your projector doesn’t have a sufficient contrast ratio to project a clear picture, you have to use contrast enhancers, like dark screen, contrast ratio settings, tint, etc.