In this article, I am going to explain how to connect fire TV stick to projector with or without HDMI in very simple steps.

After setting up a home theater room with a decent projector and an audio system, people start wondering which streaming service will be good enough to connect to the projector.

How about Amazon TV fire stick?

Can I Connect the Amazon Firestick With a Projector?

Currently, we are witnessing an exponential rise in Amazon Fire TV. Amazon said it had “well over 34 million” active users back in 2019. This number is growing by the day (), and their stock is rising.

You can connect your Amazon Fire TV stick with a projector with no wires and cables. Plug the firestick into the HDMI port of the projector. If your projector doesn’t support HDMI, you can buy an HDMI to VGA converter device, then connect both devices and begin streaming on your projector.

Using Amazon’s Fire TV stick with a projector is a very good option because the installation is not complicated, it is affordable, and this HD steamer service has a decent interface.

In the remaining article, I will tell you how you can connect a firestick with a projector using an HDMI cable, and without an HDMI cable.

How to Connect Amazon Fire Stick To a Projector With HDMI

Amazon Fire TV stick is not too expensive, you can easily find one that matches your projector.

If your projector is not HD, you can still make it work. Search on Amazon for 10 minutes, and you will find different deals on firesticks.

I use the one that streams 4K and comes with Dolby vision which is nicely compatible with my EPSON 6040UB. Dolby Atmos surround sound system is awesome.

Don’t connect the firestick to the USB port of a projector. You can get hundreds of adapters on Amazon, or use the one you normally use.

Check the back of your projector for an HDMI input. Most projectors nowadays come with two HDMI inputs.

If your projector is not HDMI supported, skip this section. We will tell you how to connect a fire stick to a projector without using HDMI later on.

If there is a space issue, you can connect your fire stick with an HDMI extension cable. There will be no issue.

Plug the Amazon fire stick into the HDMI port of the projector. After that, restart the projector, let it recognize the device.

We don’t often restart the projector but I have seen it not recognizing the device on many occasions. Restarting it will solve most of the audio and video signal issues.

For setting up a high-quality streaming display, Fire Stick is a great choice with just a minimum amount of equipment. It is the Amazon version of Roku Stick+ or Roku Express. Fire Stick has the ability of streaming content to any display device including HDTV, HDMI monitor as well as HDMI projector.

As it works best with HDTV, it is referred to as Fire TV Stick. It also allows you to watch plenty of content on services like Netflix, Amazon Prime, Disney+, and Hulu. While its interface is user-friendly as long as you have a Wi-Fi internet connection.

How to Connect Fire TV Stick To Projector Without HDMI? 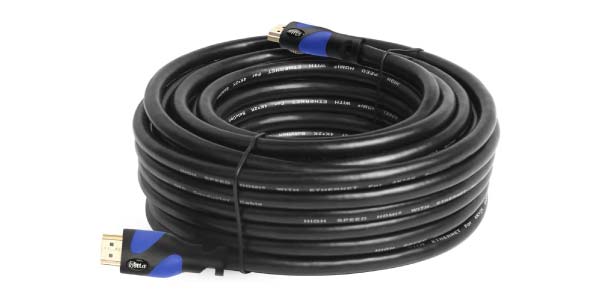 Though HDMI is the standard for most of the projectors, if you are using an older projector model then it won’t be standard anymore.

Luckily, there are some options available to connect Fire TV Stick to the projector without an HDMI.

Keep in mind, by using a converter you will lose some of the audio and image quality and better results will be obtained only with be updated model of the projector.

Connecting Fire TV Stick without HDMI will deliver lower-quality images. So, in order to compensate for the quality of the image if you try to buy a high-quality Fire TV Stick then it won’t help you to get that sound or image quality.

You should rather go for some basic options in such cases.

2. Check Source of Input Handles By Your Projector

In that case, you will find a grainy or distorted image that will thoroughly disappoint you in expectations of better results.

If the new model is without HDMI, then you can rely on a converter to connect Fire TV Stick to the projector.

As you know the type of input source you need, you can easily select an HDMI converter to the right type of input. It will be just one plug acting as an intermediary between Fire TV Stick and the projector.

If your projector is quiet and doesn’t support such connections that you will need to find a video and audio extractor to connect the Fire TV Stick and projector.

By running an optical cable and extractor you can attempt to connect your device in this way. If these steps bother you, then upgrading your projector in the first place will be an ideal option.

If your connections are compatible with your projector and are capable of delivering a high-quality image, then you can use a converter to make the connection.

For example, if you are using an HDMI to VGA converter, you may need to plug the Fire TV Stick into the converter.

Remember, the image might not come up in the best resolution if the technology of the projector and Fire Stick does not match.

Same streaming services can be chosen in case of connecting a Fire TV Stick to the projector without an HDMI.

Whatever you select, it will be enjoyable with the stable connection of Fire Stick and projector.

What is Fire TV Stick?

Fire TV Stick is a small and compact device that permits you to stream a 4K TV, projector, and even computer plugged into it. This can be connected wirelessly to Amazon Prime, Netflix, and all other services to give you access to stream a wide variety of displays.

The set-up is very easy even with an HDMI port. If you do not have an HDMI port, you can still use Fire Stick with some other methods discussed below.

How Does The Fire Stick Work?

By plugging in the Fire Stick to the HDMI port of the TV, you will be connected to Wi-Fi automatically. The next step will be to go through the set-up process and then sign in to an Amazon account. By downloading the required apps, you will be able to watch your favorite TV shows and movies.

There is also a remote that provides access to control TV with voice commands, such as Alexa to pause, rewind and search for the content.

The only limitation of the Fire TV Stick is the fact that it can not be connected to A/V connections at the back, front, or side of the TV to allow Betamax or VHS player to be linked to it by SCART or RCA composite video connection.

Most people prefer using Fire TV Stick overusing HDTV Wi-Fi connections or applications downloads due to the ease of their usage.