In this brief article, we have explained how to mount a projector on the ceiling, wall/shelf mounting, and projector tripod mount using ridiculously easy steps.

Mounting a projector on the ceiling or wall serves a rather professional and polished look for the home theater.

It also saves up a lot of space for the sound system, the room looks clear, and there is a lot less tangling with the wires. Most importantly, the picture will be bigger and we can set a perfect viewing angle by aligning the lens with the screen.

Before all that, we got to do measurements, sizing, understating the throw ratio, distance between the unit and screen, vertical offset, use ceiling mounts, and drill holes.

Letâ€™s being with how to mount a projector on the ceiling.

How To Install A Projector On The Ceiling

Mounting a projector on the ceiling is the preferable method for most users, including me, because it saves up a lot of space, doesnâ€™t worry about tripping on the wires on the ground, and improves the overall aesthetics of the home theater.

But, most of us wonâ€™t already have a power supply on the ceiling, and ripping out ceilings and floorboards is also a pain in the ass, that is why we are going to show you how to ceiling mount a projector using simple tools, decorative ideas, and clever positioning. We are going to hide those wires as well.

Letâ€™s install a projector on the ceiling using the following simple steps:

#1. Location For mounting a projector

Your wall or projection screen should not receive direct sunlight. You canâ€™t control natural light unless your room is a dark pit, but there is always gonna be some ambient present. Just make that ambient is not falling directly on the projection screen.

I will recommend installing the projector near a wall to hide the wires along the wall. 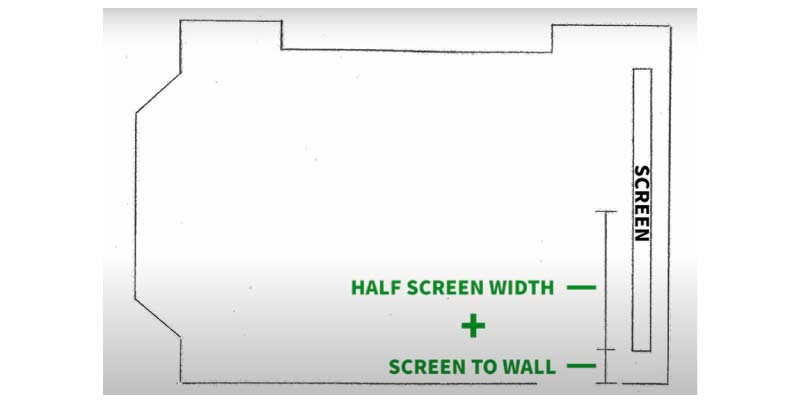 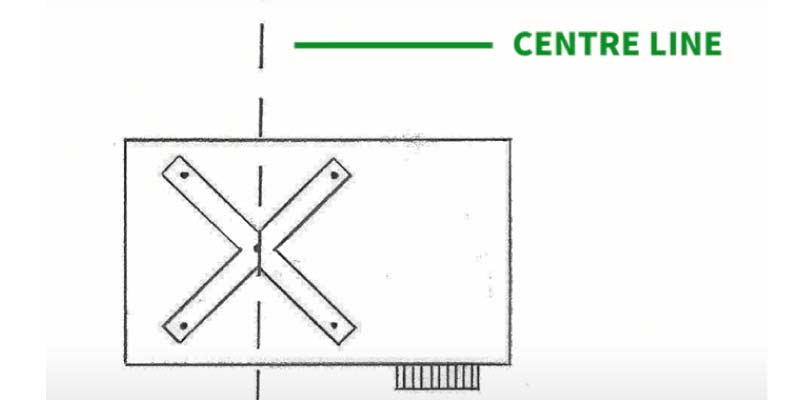 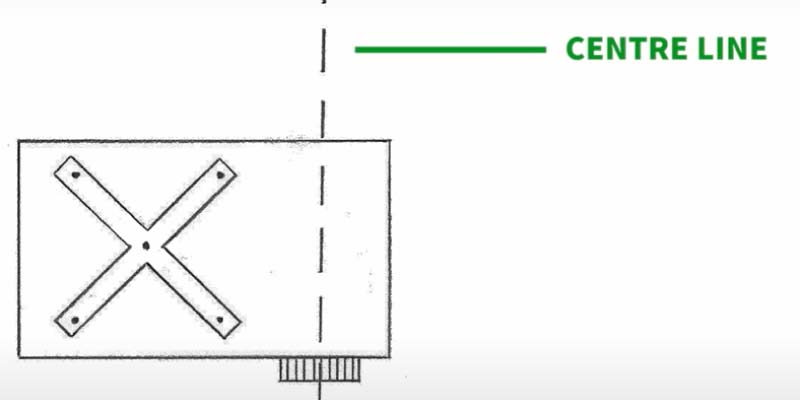 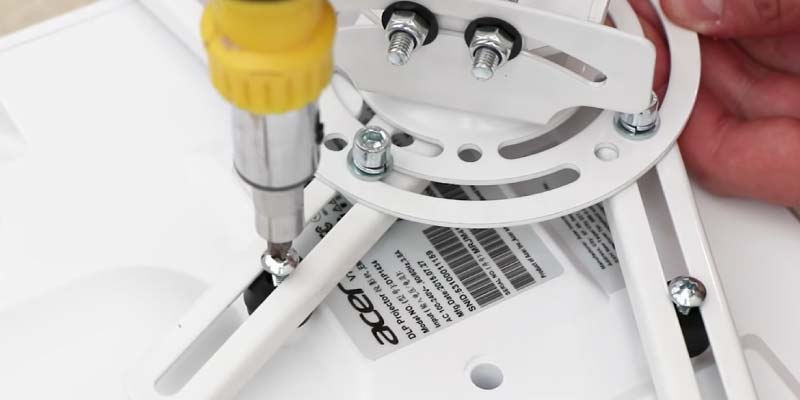 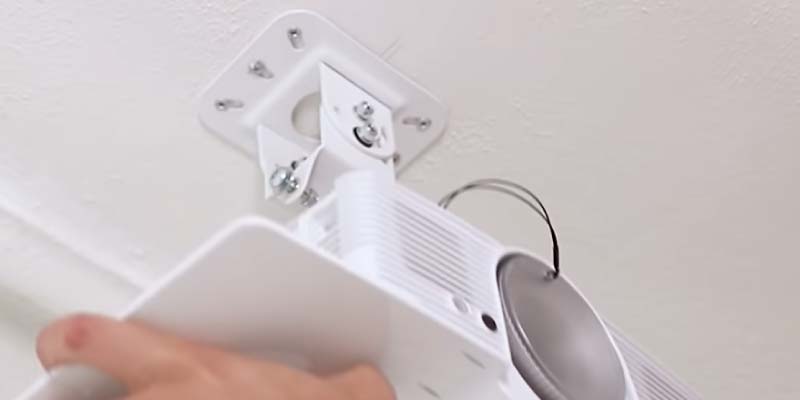 If the roof doesnâ€™t have concrete, use the extended wood panel to connect two joists in the ceiling otherwise chances of an accident are high.

Use a drill, and make sure the screws go through studs or joists to support the projectorâ€™s weight.

Carefully place the projector on the bracket.

I use an external sound source so I will only need an HDMI cable and power source, but it depends on you. Wire up the projector and place it on the bracket.

To hide those ugly wires and for safety purposes, use decorative trunking. Carefully place it into a position where you want to hide the wires. Check out this forum for more insights on how to conceal cords.Â

I would recommend mounting the projector correctly to avoid tilting and using keystone.

There you go, the ceiling mounting of a projector is done.

Checkout our guides about How To Hang Projector ScreenÂ

How To Mount A Projector Without Drilling

Nobodies like drilling in the wall or ceiling of their home. 6 months ago, I mounted my JVC-NX5 in one of my rooms which had a single fall ceiling. I drilled holes between the two joists and mounted the unit perfectly.

I wasnâ€™t aware all of that vibration of the drill made my single fall ceiling weak, it fell. Luckily no one was in the room. Always check your ceiling condition before drilling holes into it to prevent accidents.

There are other ways to mount a projector without drilling holes. Mounting of laser and lamp projector is the same. 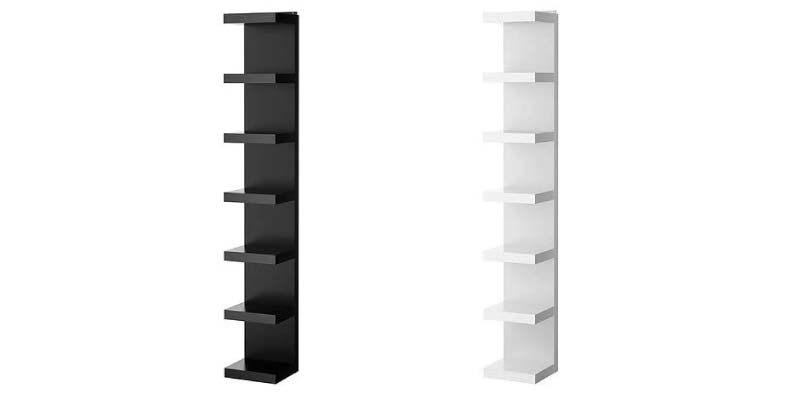 I purchased an IKEA shelf whose shelves are removable. It is about 75 inches tall. Place it in front of your screen, and place your projector on it. I use 3M command strips to hold the shelf in place.

Additionally, I have placed my couch in front after removing the bottom two shelves. Most of the weight will be supported by the couch.

You can use decorative trunking to hide the ugly wires or cable cover strips. Nobody likes to dangle with wires.

Pros And Cons Of shelf Mount 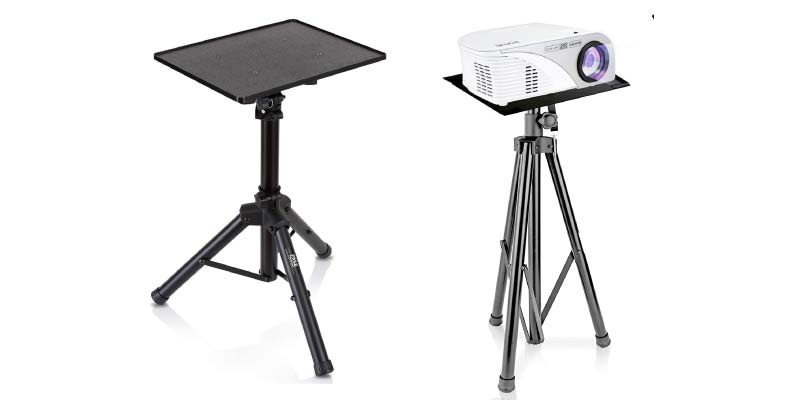 Let me tell you how it is done.

The side panel of any old computer will do the job. Make sure your plate is at least 2cm bigger than your projector so it will not fall off.

Makes holes instead of holes because a bigger hole can ruin the metal plate. Make little grooves according to the back of the projector.

Sometimes you would need to cut the screws so that they fit the holes.

Use decorative trunking to hide the wires. Projector tripod mounting can be a little messy because it takes someplace, so makes sure to hide those wires properly.

The following three brands are selected by our expert team based on popularity, reliability, durability, and budget.

As an expert, I would ceiling mount for better aesthetics, viewing angle, and to save some space, but wall mounting and tripod mounting also works if you can somehow minimize the ambient light and maximize the viewing experience.

Projector ceiling mounts are universal, but specific mountings can be purchase for a specific projector model for home theater.

Q: Should I ceil mount my projector?

The ceiling mount is best to save some space and fit the unit closer to the screen than a shelf mount. Your viewing angle will be better as well.

Q: How far should my projector be from 120in screen?

Q: Does the projector need to be centered with the screen?

Projectorâ€™s lens should be in line with the screen (align with the horizontal center of your screen). Offset installation is also an option but a centered projector is always recommended for the best viewing angle.

Q: How much does it cost to install a projector?

Between 100 to 500 dollars is the average, but it is fairly simple to install by yourself. You and install the screen and the projector in only 1 or 2 hours using the right tools and ceiling mount.