PlayStation 4 also popularly known as PS4, is the best yet highly affordable gaming console that guarantees to provide an excellent gaming experience. For an improved gaming experience, you may want to connect your PS4 to a projector. As it is obvious, a big screen will add more fun to the activity and you should go for it.

So, what would be better than switching to a big screen projector without spending colossal dollars? But most people find it confusing that either is it possible to connect PS4 to a projector. You might have the same question in your head, that’s why you are here.

In this article, we are going to clear all of your doubts regarding connecting PS4 to the projector.

Is It Possible To Connect PS4 To The Projector?

Of course, yes. It is possible to connect PS4 to a projector. There are several ways you can do this job and here I’ll share a few of the easy methods you can try to connect a projector and PS4.

In fact, it can prove very advantageous for you, if you connect PS4 to a projector such as you will get a bigger screen and high-quality graphics.

There is only one disadvantage of connecting a PS4 to a projector and that is, you’ll face motion sickness if you spend more time gaming on the big screen.

Now as the advantages and disadvantages are clear to you, let’s talk about how you can do it.

How To Connect PS4 To The Projector?

All of these methods are highly beneficial and the results will be great. Even if you want to connect your soundbars, you can also do it without any difficulty.

How To Connect PS4 To The Projector With HDMI

The steps involved in connecting PS4 to the projector with the help of HDMI are mentioned below:

By following these easy steps, you can easily connect your PS4 to a projector by using HDMI cable and HDMI ports. It’d be easy to make a connection but the HDMI cable is usually 1-meter long. In case your projector is mounted on the ceiling then you will definitely need a cable longer than 1-meter to connect it properly to the PS4.

How To Connect PS4 To The Projector Without HDMI

If you have an old projector that doesn’t support an HDMI cable, then you don’t need to worry about it. You can still connect your PS4 to a projector without an HDMI cable or port.

To do this job, you will need an HDMI adapter sporting the same connection port on the projector. If you don’t want to go with an adapter, you can also choose to get HDMI to VGA cable. This will enable the conversion of digital signals from HDMI cable to analog signals from a VGA port.

The step-wise process for this purpose is as follows:

How To Connect PS4 To The Projector With A VGA Cable?

This is the whole method you can easily do to connect PS4 to the projector with the help of a VGA cable.

How To Connect PS4 To The Projector With The DVI Port?

HDMI to DVI with an audio converter will be required, if you want to connect PS4 to the projector by DVI port.

If you have got the converter in your hands, find the DVI output port and HDMI input. Then connect the HDMI cable with the converter and PS4.

Only stereo audio will be available through this connection and to get the audio you will also need to get aux to stereo cable.

Check out the following related guides as well

How To Connect PS4 To The Soundbar And The Projector?

To enhance the quality of sound, if you want to use a soundbar with a PS4 or projector, there will be a need for HDMI splitters. With the aid of an HDMI splitter, you can easily extract sound/audio from PS4.

For this purpose, three HDMI cables will be required. The first cable will be connected between PS4 and HDMI splitter.

Two HDMI output options are present in splitters and with the first one, we can connect the projector. While the second one will be used to connect soundbars. In this way, a connection will be established from PS4 to the projector to the soundbars.

Checkout how to connect speakers to projector

Is It A Good Idea To Play PS4 Games On A Projector? 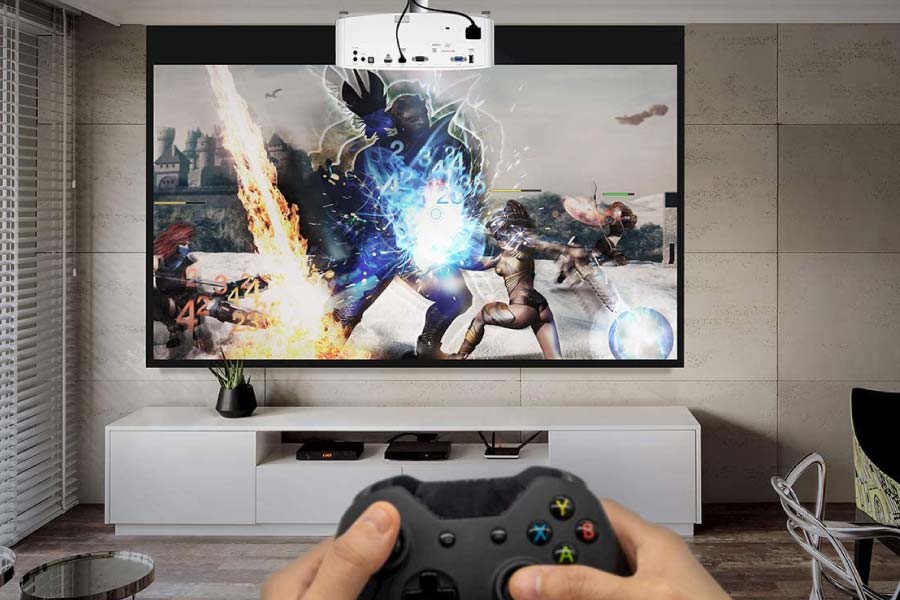 Before connecting your PS4 to a projector for gaming you should know first whether it’d be fine to do so.

Though projectors are responsible for providing life-like colors on the large screen, it is also important to know about the latency rate of the projector. For a great gaming experience, your projector should have a low latency rate or input lag.

Gaming becomes enjoyable and fast when the lag is minimal. The latency rate should be at least 100ms if you’re playing a normal game. But in the case of the hardcore game the input lag must not exceed 15ms otherwise there will be high lag and all your mood to enjoy gaming will be ruined.

If you have successfully connected your PS4 to the projector and nothing is showing up on the screen. Then it means you need to make some adjustments in settings and here we have compiled the right way to do so.

If the distance between the projector and PlayStation is quite long, it is recommended to use an active optic fiber HDMI cable.

You can also make these changes by turning on the HDCP settings on PS4.

It is significant to choose the right HDMI, VGA, or DVI cables for establishing that connection.

In the case of using converters to convert HDMI to VGA or HDMI to DVI, it is compulsory to power up the converter.

While connecting PS4 to a projector you should research thoroughly about the projectors that can work well with your device. You won’t want to waste your money over purchasing a unit that isn’t suitable for the resolution or capacity of your PlayStation.

You should consider choosing a projector that is able to provide great image quality and also great sound quality.